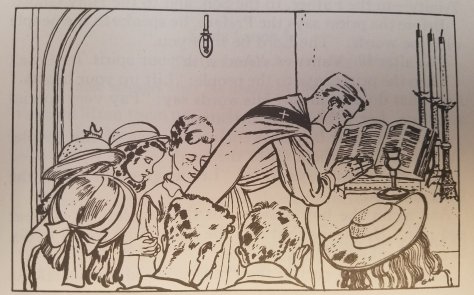 It is indeed meet and just, right and profitable unto salvation, always and everywhere to give thanks to Thee, holy Lord, Father almighty, eternal God, who with Thine only begotten Son and the Holy Ghost art one God, one Lord; not in the unity of a single person, but in the trinity of a single nature. For that which we believe from Thy revelation concerning Thy glory, that same we believe of Thy Son, that same of the Holy Ghost, without difference or discrimination. So that in confessing the true and everlasting Godhead, we shall adore distinction in persons, oneness in being, and equality in majesty. This the angels and the archangels, the cherubim, too, and the seraphim do praise; day by day they cease not to get out, saying as with one voice:

The Canon is the Consecration part of the Mass.

The Preface is the introduction to the Canon. It is a prayer of praise and thanksgiving to the most Blessed Trinity–to the Father, to the Son, and to the Holy Ghost.

Before the priest says the Preface, he speaks to the people with the words: “The Lord be with you.”

The altar boys answer: “And with thy spirit.”

Then the priest says to the people: “Lift up your hearts.” And what does that mean? His words say: “Pay very special attention. Let it be loving attention.”

Again the altar boy answers in the name of the people: “We have lifted them up to the Lord.”

Next the priest says to us: “Let us give thanks to the Lord our God.”

And again the boy answers for the people: “It is meet and just.” He means that it is the right thing for us to do, to give thanks to Almighty God.

Then the priest recites the Preface. He says it aloud. As he does so, his hands are extended outward. They show that he is begging God to listen.

In the Preface we speak our thanks to God. Our gift of thanksgiving we give to God immediately after the Consecration when we offer Our Lord to God the Father.

The word eucharist means “giving thanks.” To thank God for His many favors is one of the four chief purposes for which the Holy Sacrifice of the Mass is offered.

The Preface, given at the beginning of this lesson, is the one used on almost all Sundays. At certain times parts of the Preface change.

The short prayer after the Preface is called “The Sanctus.” Sanctus is the Latin word for holy. In the Sanctus we use words of the angels in giving praise to our Blessed Lord. He will become present on the altar at the Consecration. At that time He becomes our Gift to God. He becomes the victim of sacrifice.

Taken from The Kingdom of God series The Holy Sacrifice of the Mass by Ellamay Horan. I am not the Author merely the distributor. God Bless BJS!!