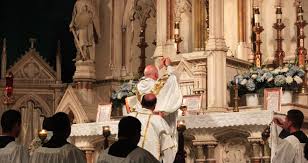 What is the Tridentine Mass?


It’s the Mass used in the Catholic Church for almost 1500 years, until the introduction of the “New Mass” of  Paul VI following the Second Vatican Council.

Why is it called the Tridentine Mass?

Because it was codified by the Council of Trent in the 16th century. But the Mass itself is far older than that. The Canon, or central part, of the Mass dates back to the time of St Gregory in the sixth century where he made it official, but it can be found even earlier in the writings and practices of Saint Ambrose and Saint Antony the Great in the third century.
In 1570, Pope St Pius V – in his Papal Bull Quo Primum – said that priests could use the Tridentine rite forever, “without scruple of conscience or fear of penalty

Wasn’t the Tridentine Mass banned?
No, but following the Second Vatican Council, its public use was (unjustly) suppressed by most Paul VI and the Bishops.
After the introduction of  Paul VI’s new Mass, the only priests given permission to say the Tridentine Mass publicly were priests of England and Wales, thanks to an indult (or permission) granted by the Vatican to Cardinal Heenan of Westminster.
Other priests – such as Padre Pio- continued to use the old Mass privately instead of the new rite.
After a thorough review of the teachings of the Catholic Church, this Mass could never be revoked and it is impossible to say that the perfect Holy Sacrifice of the Mass is a bad thing or needs to revamped. Never listen to those, even Bishops and “Popes”, who tell you to do less for God. By going to the invalid Novus Ordo Mass, you are turning your back on the true sacrifice on Calvary, since the New Mass is directly connected to the wishes of the reformers (Protestant) of the Reformation and Freemasons. Do not believe those who try to tell you it is “just going back to its original form”. That is like saying you can plant a seed, watch the tree grow, and then cut it down and ignore all the fruits through the centuries.

Furthermore, this way of thinking is against Church teaching and has been previously condemned. Pope Saint Pius V warned us and made it clear that the Holy Sacrifice of the Mass could never change. Please read the encyclical Quo Primum.

What’s the advantage of the Tridentine Mass?

The validity of the Tridentine Mass is shown, not only by the Papal Bull, but also its uniformity and experiencing the words of the Holy Ghost. Wherever Catholics go in the world, the Tridentine Mass is exactly the same. The movements and gestures of the Mass are clearly prescribed and each have a purpose, so there’s no room for “personalization and innovations” and other abuses of the liturgy. And the time-honored Latin and Prayers of the Mass reverently reflects the sacrificial nature of the celebration and the inspiration of the Holy Ghost. This Mass expresses the Dogmas such as Purgatory and Blessed Mother, as well, there is no doubt that something heavenly is happening.
So are Catholics entitled to attend a Tridentine Mass if they wish?
Absolutely!  This question was added for those of you who are nervous of going against a Bishop, and rightly so. Many members of our community went through similar experiences and were afraid that they themselves were outside the Church. As we prayed and studied more, we started to learn the truth and stood up for the faith, the problems with the new mass and the new sacraments are simply too overwhelming to list here on this website page. Simply ask yourself, how could the Mass that all the great saints attended be now a bad thing? As well you must come to terms with the fruits of the New Mass, for example, no reverence or modesty, no unity, liturgical abuses, ill informed priest, and empty pews. Judge it by the fruits, this Mass was not written by the Holy Ghost. You do not have to wait for a Bishop to “allow” a Tridentine Mass to be said in your diocese. Unfortunately we must fight and seek the Truth, even if that means going to a small chapel where the Tridentine Mass is offered. We certainly do not approve or advocate disobedience, but only advocate obedience to Divine Law and true Popes and Bishops. You must choose God over ill informed or evil men. Obedience to God and the teachings of His Holy Catholic Church come first. For instance, if you know a priest that says that Blessed Mother was not the Immaculate Conception, he would be denying a Dogma of the Catholic Church, therefore making him a heretic. You would not listen and follow this priest, in fact it is your responsibility to inform him otherwise. The truth is, many priest do not believe that Blessed Mother was the Immaculate Conception, and it gets much worse than that. The present authority of the Catholic Church is overwhelmingly corrupted by heresy and therefore the men who support these errors in Holy Mother Church do not hold any authority. The Devil is trying his best to destroy the One True Faith.

**Please investigate each place you go to for Mass. There are traditionalist, many with good intentions, that think they can be ordained by anyone and be a priest. Also please stay away from Traditional groups that have completely gone too far,. For instance, groups that have “elected” their own pope.
Lastly, it is very important to know that your priest should be validly ordained in the traditional rite. The reason for this is because the New Church has changed the consecration formula of Bishops in the late 60’s . On November 13, 1947, Pope Pius XII had given us a specific form of consecration for validity in his encyclical Sacramentum Ordinis. This consecration has been used for centuries and has always had the essential words

Pope Pius XII  said the words in the consecration were absolutely needed for validity. The only word in the new consecration that remains the same as in the old is the word “and”. The bishops that were ordained by this new consecration are in fact invalid (Roman Rite), therefore not making them priests. We realize that this is a lot to digest, but if you want valid sacraments you must find a priest that does the traditional rites and is validly ordained by a valid Bishop. Our Holy Mother Church is in a great spiritual war. We must continue to pray the rosary and read the teachings of the Doctors, saints and theologians of the pre-Vatican II era.

This was an article on http://www.willingshepards.net&nbsp;

here is some more modernism disguised as Catholicism